Tartiflette: What Potatoes Au Gratin Should Have Been [ Because Bacon! ] 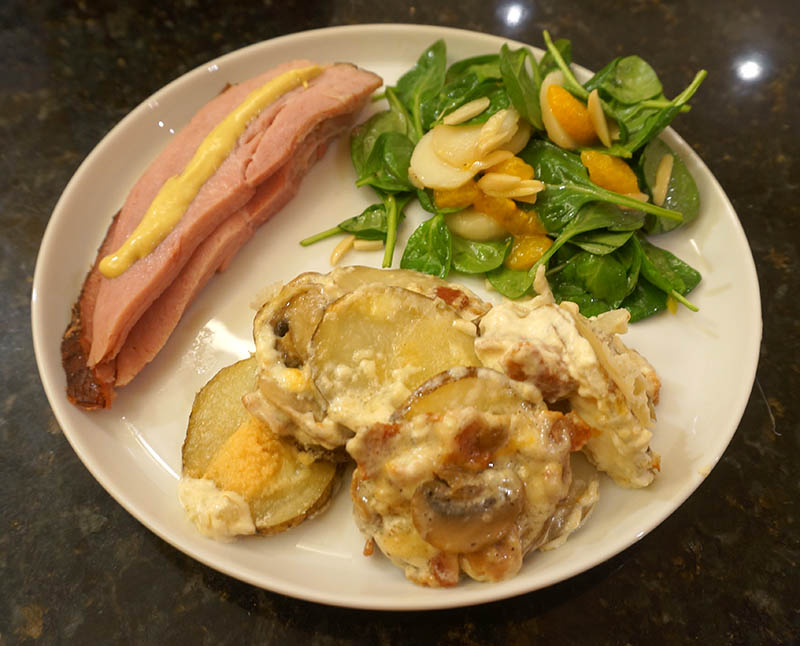 They say the winners write the history books.  But did you ever wonder what might have been?

Consider Potatoes Au Gratin, also called Scallop Potatoes.  We’re very familiar with these cheezy potatoes here in the US.  But consider these graphs from Google Trends: 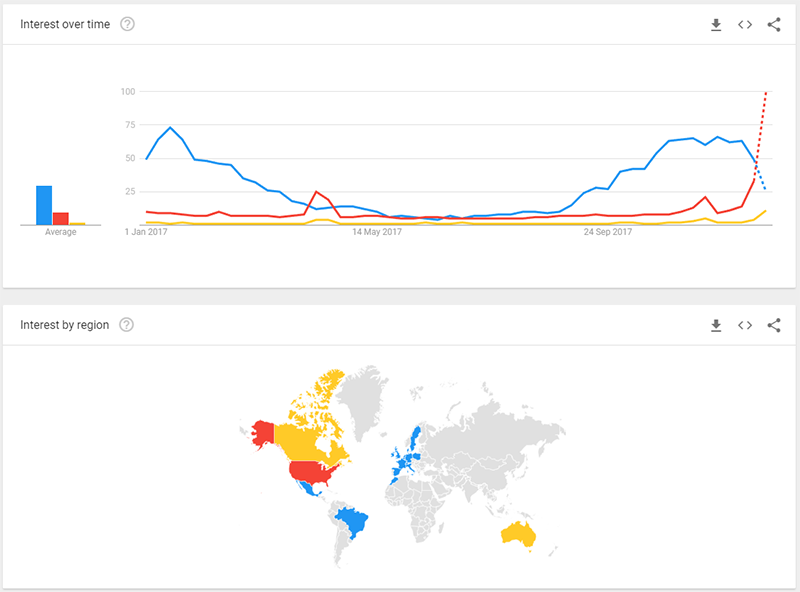 Blue is for Tartiflette, Red is for Au Gratin, and Yellow is for Scallop…

Blue is for Tartiflette, Red is for Au Gratin, and Yellow is for Scallop and the graph shows the relative popularity of the search terms.  Apparently Au gratin is the favorite in the US, Scallop in Canada and Australia, and Tartiflette in Europe.

Here’s the thing you need to know:

Tartiflette has not just cheese, but BACON and mushrooms too!

Anyone that has tried Tartiflette knows that it totally crushes ordinary cheezy potatoes in every way.  But it seems we’ve barely heard of Tartiflette in this country.  In fact, as I was researching the article, I noticed the vast majority of what’s written about Tartiflette on the web was written in French! So far, no one I have served it to other than Europeans had heard of it.  So I’m on a mission to get the word out over here about these phenomenal and amazing potatoes.  Seriously, if you’ve never tried Tartiflette, you’ve been missing out and it’s time you seriously indulged.

I first learned of Tartiflette from David Rosengarten, who listed it as one of the dishes he would make for his last supper.  I agree, it is definitely one of my all-time favorites.

The origin of Tartiflette dates back to 1705, but it gained renewed vigor in the 80’s as a means of marketing Reblochon cheese.  Roughly speaking, it’s from the Haute Savoie region of Burgundy, which is a good pedigree indeed.

Variations abound, and my version doesn’t use Reblochon as it’s not that easy to come by where I live.  My family jokingly refers to this dish as “Stinky Cheese Potatoes all Rotten”, but they adore it.

I tend to serve Tartiflette with simpler entres.  It’s already rich and complex, so serving it with an entre that includes a fancy sauce is overkill.  Put it with something simple like ham and it elevates your dinner to a whole new level.

Note: We always make a double recipe as Tartiflette keeps well and microwaves well.  It can even be frozen. 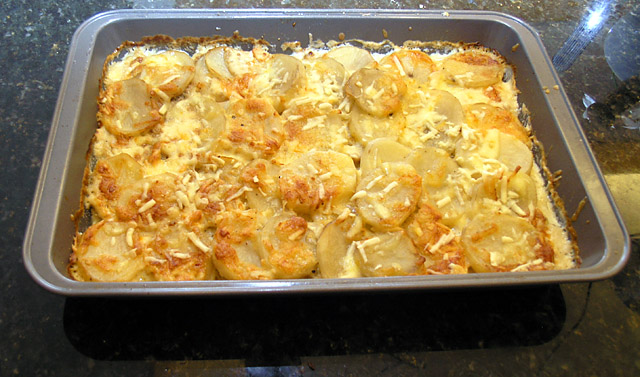 Preheat your oven to 300 degrees

In a skillet, saute the bacon until it is crisp and brown, about 5 minutes. Drain on a paper towel.

Discard all but 1 tablespoon of bacon fat and saute the mushrooms in the remainder until they brown, another 5 minutes.

Generously butter a 9 by 13 inch baking pan. Layer half the potatoes in the pan. Cover with all the bacon, all the mushrooms, and half the cheese. Salt and pepper. Add the other half of the potatoes. Sprinkle half the remaining cheese, and add the cream until it just covers the potatoes.

Bake for 60 minutes or until the potatoes are tender. Remove from oven and cover with the remaining cheese. Put it back in until the cheese is browned and bubbly. Let sit, covered in foil, for 10 to 15 minutes before serving bubbly hot.