Do you want a seriously jazzy dinner everyone will like and declare gourmet?  Do want it to be easy enough anyone can make it?

If so, you want my Kentucky Bourbon and Green Peppercorn Sauce for Steak.  You will not be disappointed and neither will your guests.  This is the recipe I turn to when I really want to blow the doors off.  It’s basically similar to a French Steak Au Poivre, but kicked up a bunch of notches and made with Bourbon instead of Cointreau.

You see, Bourbon seriously goes with Beef.  Famous Chef Michael Mina has a chain of restaurants called “Bourbon Steak.” He knows they go together and so do his customers!  You don’t even have to be a Bourbon lover to like this combination, I promise.

Let’s walk through it, I’ll show you how to make it, and I’ll let you know the special tips that really amp up this recipe.

4 filet mignon steaks, 6 to 8 ounces each and no more than 1 1/2 inches thick. We like to use Omaha steaks.
Kosher salt
2 tablespoons whole peppercorns.  Use green peppercorns if you can get them, but black are good too.
1 tablespoon unsalted butter
1 teaspoon olive oil
1 shallot
1/3 cup Kentucky Bourbon, plus 1 teaspoon. I’m a Jack Daniels man, but my brother prefers Jim Beam
1 cup heavy cream

Remove the steaks from the refrigerator, sprinkle all sides with salt, and let rest for 30 minutes and to 1 hour prior to cooking.

While the steaks are resting coarsely crush the peppercorns. I use a mortar and pestle, but the bottom of a cast iron skillet, or a lot of other items in the kitchen would work.

Tip:  Green Peppercorns have a milder, smoother, and much rounder flavor than black. This dish is fabulous with black peppercorns, but better with green.

Press the fillets, on both sides, into the pepper until it coats their surface. Set aside. I usually get this done in the first 10 minutes the steaks are resting, so they’re coated with the mixture for a little while. 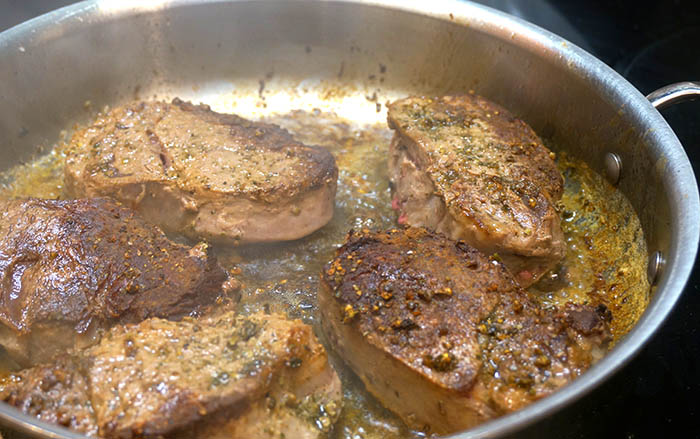 In a medium skillet over medium heat, melt the butter and olive oil. As soon as the butter and oil begin to turn golden and smoke, gently place the steaks in the pan. For medium-rare, cook for 5 minutes on each side. Once done, remove the steaks to a plate, and tent with foil. 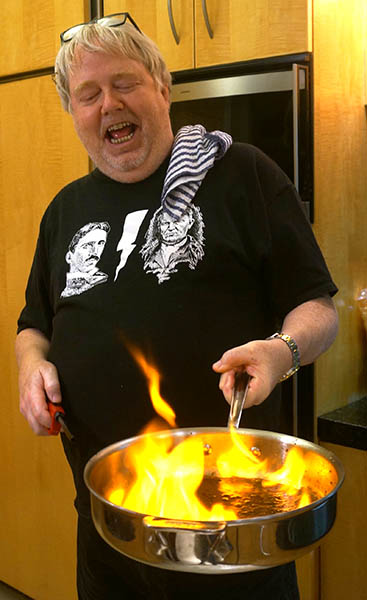 Now comes the exciting part! Take the skillet off of the heat, add 1/3 cup Bourbon to the pan and shake the pan a bit to mix the Bourbon in.  Carefully ignite the alcohol with a long match or firestick. Gently shake the pan until the flames die.  Hold it well away or you can singe your eyebrows (don’t ask me how I know, LOL)!

I love the show of flambe.  There’s a lovely place in Cozumel, Mexico that flambes almost everything.  It’s called Pepe’s and you look out over the ocean as you dine, waiters in tuxes serve you, and the whole experience is just magical.  But I digress.

Now, you’re probably concerned about all those burned bits in the bottom of the pan and wondering how this is going to turn out.  Don’t panic!  We’ve used a pro-technique called “Deglazing.”

Those seemingly burnt bits are bursting with flavor, and the alcohol in the Bourbon has released them from your pan’s bottom.  You can scrape a bit if you want to make sure, but trust me, there is tons more flavor in those pan drippings than before that alcohol went in.

Return the pan to medium heat, dice the shallot in, and add the cream.

A friend one time was peering over my shoulder as I added diced shallots to some sauce or other.  She asked, “Why would you put onion in that?”  I responded, “These are shallots, dear, and they will make any sauce taste more complex.”  My good friend Chef Michael Clark introduced me to this tip when I asked him what I could do to make my Kentucky Bourbon Steaks taste even better. 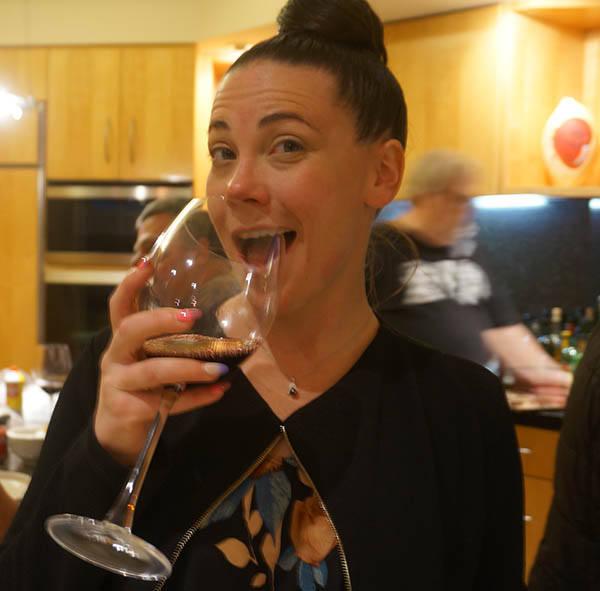 Of course guests will congregate as you cook.  Don’t make them wait too long, and give them a nice glass of wine to pass the time!

Bring the mixture to a boil and whisk until the sauce coats the back of a spoon, approximately 5 to 6 minutes. Add the teaspoon of Bourbon and season, to taste, with salt.

Last step is called (in French) “mounting the butter“, and it is another great tip Chef Michael gave me.

Slice off small pats of well chilled butter and add. Let them melt and stop when the sauce has taken on a nice sheen.  Mounting gives your sauces that beautiful sheen, makes them taste richer, and gives the sauce an even creamier texture.  It works best with cream-based sauces because it creates an emulsion with the cream that absorbs and melds all the surrounding flavors.

Now, add the steaks back to the pan, spoon the sauce over, and serve.

We like to serve these as part of a simple meal with baked potatoes and a green salad. The whole thing probably takes an hour and a half to make. Put some of the cream sauce on the table–it’s wonderful on the baked potatoes!

Wow!  I still remember that meal.  The gravy ran and is not so pretty to photograph, but it surely was tasty!  We had Hasselback potatoes with my friend Manny’s special dressing too.