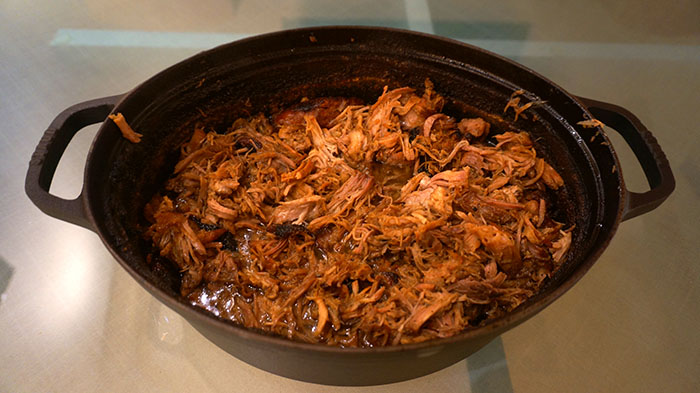 You just got a call from your spouse.  You’re entertaining 15 friends tomorrow for lunch.  You’d like to serve something tasty, not too expensive, and easy to make on short notice.  You love the idea of BBQ Pork Sliders, but no way do you have time to smoke pork for 10 hours.  In fact, you need a dish you can basically shove into the oven and forget about while you get on with other preparations.

Hey, don’t panic, this “Fuhgeddaboutit Easy Smoked Pork Butt” is the perfect answer to your problem.  It’s super easy to make, you shove it in the over for about 4 hours, and it’s done.  Moist, flavorful, pulled pork that your guests will rave about.

Many variations are possible once you have good pulled pork on hand.  Sauce it up different ways.  Stick it in soft tacos instead of sliders.  Or, just serve it on the plate along with suitable BBQ sides like potato salad. Got some ham kicking around?  How about making some choice Cubano sandwiches for your guests.

They are gonna be so happy, just don’t forget the cold beer!

Okay, here’s one more idea.  You like beach parties?  Because I sure do.  I love to bring a rig similar to a turkey frier–a big pot with a propane burner.  I usually boil shrimp, but you could use that same rig to make the pulled pork right at the beach or a campsite.  Dang, the possibilities are endless. 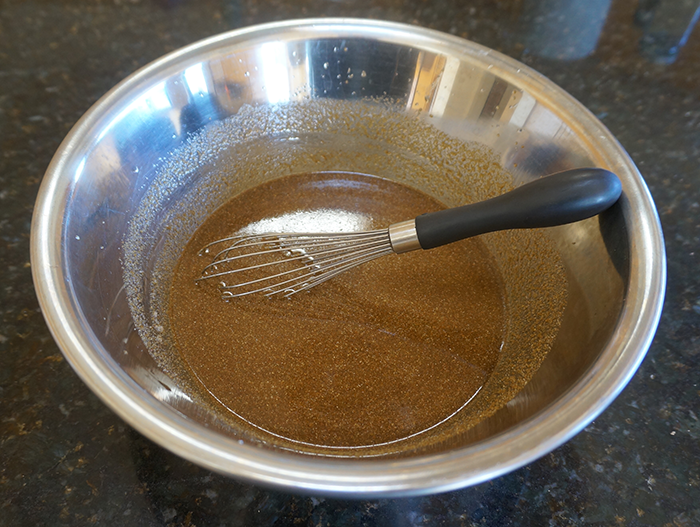 Combine your spices to make a slurry…

Place the salt, cumin, dried onion, brown sugar, and liquid smoke in a bowl with just enough water so you can whisk it into a slurry.  Adjust taste with salt and pepper. 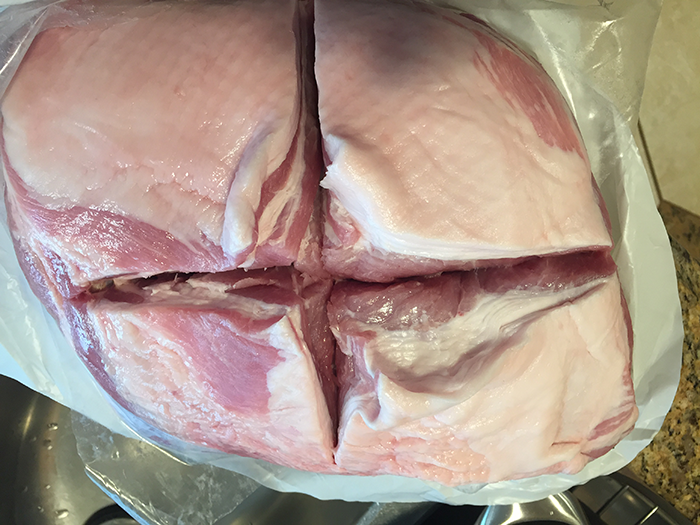 Put your pork butt in a large pot.  Slice an “X” into the top so it’ll cook faster and bring the flavors deeper into the meat.

Add the slurry, then add water until the level covers about 3/4 of the pork butt, like this: 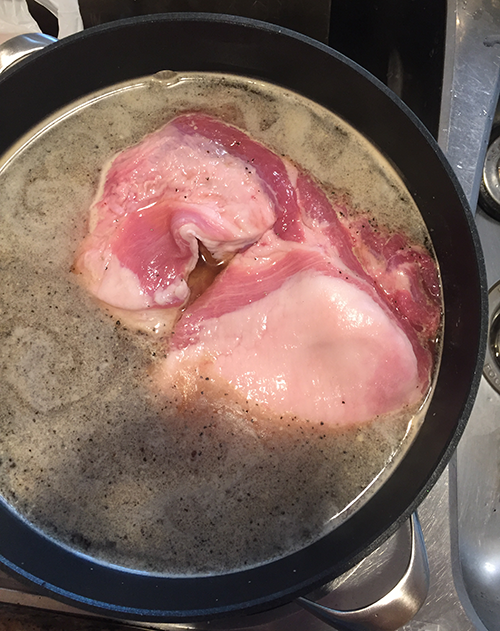 That’s plenty of liquid to ensure the meat stays moist without diluting the seasonings too much.

It’s done when the meat temperature is 195-205F.  For a big pork butt like this, that’ll typically be on the order of 4 hours.

Why so hot?  Because we have to break down the collagen in a cut of meat like this.  That’s what makes it fall-apart tender, and it takes heat.  Cooking like we do here in so much liquid keeps the pork from drying out in all that heat.

BTW, if you were going to smoke the pork butt, reaching those temps will seem to take forever (10 hours or so in most cases), and you’ll need to either brine the meat or inject the heck out of it with marinade to ensure it stays moist throughout that ordeal.  How often have you had pulled pork that was too dry?  That’s what happens if you fail to brine or inject and then put the meat in a smoker.

With this recipe, just make sure the marinade doesn’t get too low during cooking.  No harm in topping it off with a cup of water every so often.

Don’t get me wrong, I love smoked meat as much as the next guy, but dang, we sure saved ourselves a lot of work going this route!

One more benefit–you won’t believe how good your house smells when you’re making this recipe.  My guests walk in with mouths watering every time.

How to Pull Pork

Once done, chop the meat up, a process commonly called “pulling.”

Traditionally it’s done at BBQ shacks with two cleavers, but go with whatever works best for you.  If the meat was done right, it’ll be tender enough to pull apart with your hands if you have some heat proof BBQ gauntlets.  I use my BBQ gauntlets constantly because they leave the bark intact. 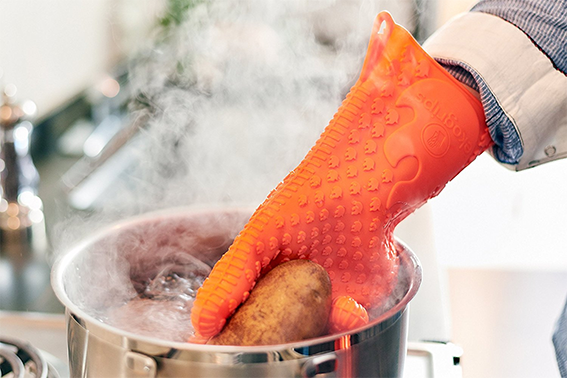 A couple of big forks do the job too.  It didn’t take me more than a minute to pull 10 pounds of pork with two meat serving forks.

Or, if you’re into power tools (I am!), chuck this bad boy up in an electric drill and you can pull a bunch of pork in no time for a big party or catering job: 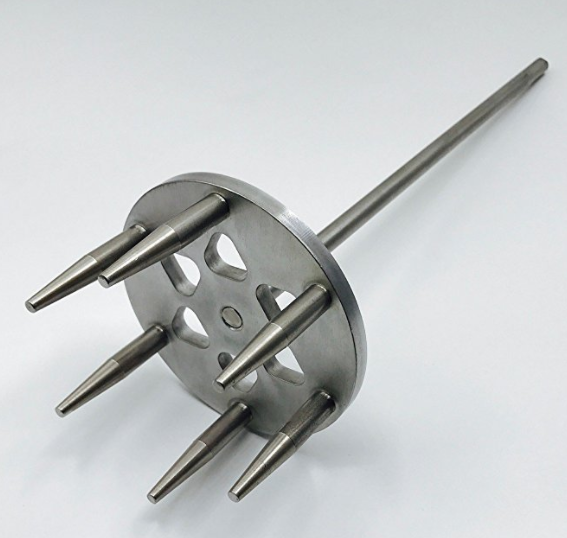 What could be easier?

How to Choose the Best Pork Shoulder / Pork Butt

Why is it called “Pork Butt”?

After all, a Pork Butt is actually a Pork Shoulder.  The butt area is more properly ham territory.

The origin is a cut that is more properly called “Boston Butt.”  It’s the upper part of the pork shoulder, while the lower part is called a picnic cut.

As far as choosing a good Pork Butt, here’s what I look for: