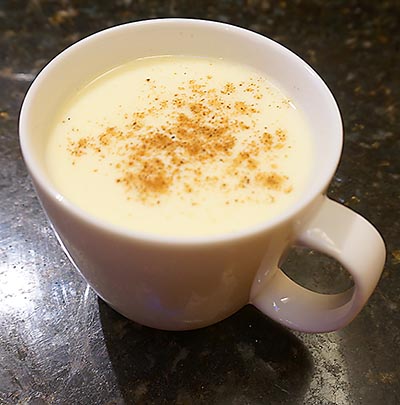 Let me start by saying, I love rum drinks and I love egg nog, so deciding what the best rum for eggnog might be was a priority in my life.

Of course not everyone even agrees rum is the liquor of chocie for spiking their holiday egg nog.  There are devotees of whiskey and bourbon as well.

Let’s solve this question once and for all with a survey:

What goes in my eggnog?

We’ll let the Wisdom of the Crowd tell us what they think, but meanwhile, here’s my two cents:

Eggnog is a creamy smooth and very rich drink.  It’s just this side of a milk shake.  As such, I like mine without any sharp edges in the flavor, and the most likely source of sharp edges is the choice of liquor.

I’ve tried all the usual suspects–rum, brandy, and whiskey.  For my money, rum is the best, whiskey is a distant second, and brandy comes in dead last for my taste buds.  Like I said, that’s worth all of 2 cents because you want what you like, not what I like, right?

Let me say in advance that some take just the opposite of my “no sharp edge” approach.  They feel that since the natural egg nog flavor is so rich and creamy, that’s precisely why you need some sharp edges so the rum can make itself heard.  You should try it both ways and decide what your own preference is.

In keeping with that “no sharp edges to the taste” theme, I’ve tried the dark rums I like in many cocktails, and I prefer light rum.  In fact, I prefer good old Bacardi Rum in my egg nog:

I like regular old Bacardi Rum in my egg nog…

I know, I know, it’s disappointing for a Foodie not to be recommending some rare ingredient that’s hard to find and expensive to come by, but I only recommend those ingredients when I think they matter.

By the way, if you’re going to try Whiskey, be sure to give Rye a taste.  I find it to be closer to my “no sharp edges” ideal than Bourbon and the normal flavors of Rye can compliment egg nog well.

Holidays can be a lot of work.  There’s so much food to prepare, so many dishes, that making eggnog from scratch may be a bridge too far.  There just aren’t enough hours in the day.

So I traditionally take the lazy approach, which is to say I use store-bought eggnog and just add some booze to it.

I prefer to make each drink to order, as my guests often have widely varying requirements.

The first step is to pour the alcohol.  How much you pour comes down to asking how much alcohol do they want to taste?

Put aside your jigger, this is a job best done by eye.  Here’s the scale I use: 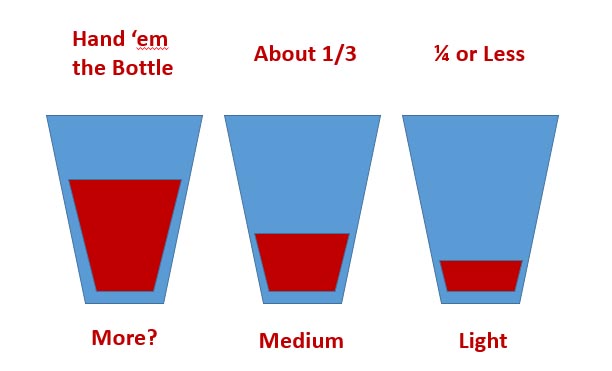 It’s not rocket science, so don’t over complicate things.  Medium (about 1/3 by height when poured first) works for most simple drinks like eggnog or a rum and coke.

More delicate palates want less, and you should oblige.  While there are some who will want more.  I always hand the guest the bottle so they can pour to their preference.

Next, top off with eggnog.  Stir to blend the alcohol which will want to float on top.  Make sure it’s well-blended.

Is Nutmeg a Must?  Should it be freshly ground?

First thing to know is most eggnog recipes include nutmeg in the nog as it’s being cooked.  So even if you don’t sprinkle any on top, you are still going to be tasting a bit of nutmeg.

I like to add it for two reasons.  First, it just looks good.  Presentation counts with food.  Second, it perks things up and varies the taste as each sip has varying amounts of sprinkled on nutmeg.

Must it be freshly ground?  That’s up to you.  If you have time and a nutmeg grinder all set up for it, the showmanship and taste can’t be beat.  But don’t let the lack of fresh ground deter you from sprinkling on the nutmeg. 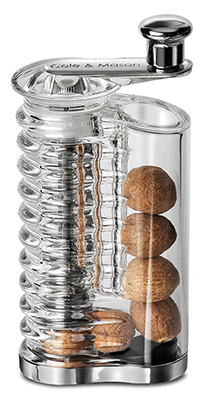 Nutmeg Grinder adds a splash of class to your eggnog prep…

It looks great, loads fresh nutmeg easily, and works well.  They’re about $25 on Amazon as I write this and would be a nice gift for your favorite Foodie.