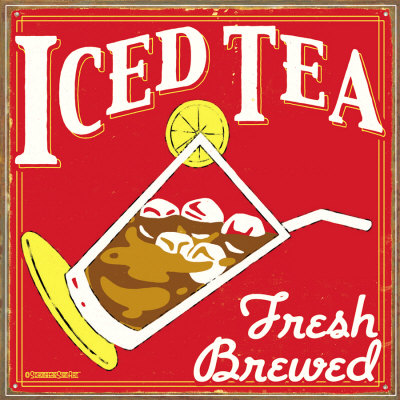 I came up with this recipe for Father’s Day last year.

Many will celebrate this occasion by hoisting an ice cold brewskie or two. Much as I like a good beer, I also like trying new cocktails. This Father’s Day, we’ll be gathering family and friends around a pot of gumbo and some boiled shrimp. There’s a pan of cornbread and some rice pudding too. And, to keep everything chilling, we’ll be drinking a cocktail I call “Bob’s Swamp Tea.” Sweet tea is very popular in the South, and refreshing for hot weather. Swamp Tea is a cocktail based on the taste of sweet tea and lemonade–an Arnold Palmer for Good Ole Boys, if you will.

I first tried something similar at a Houston Cajun restaurant called Pappadeux’s. Their version is called “Bayou Sweet Tea”, and is a mixture of lemonade, Cointreau, and the key active ingredient which is Firefly Sweet Tea Vodka. I can’t get Firefly here, but there’s more than one tea-infused vodka available out there. In fact, Absolut has just launched Absolut Wild Tea vodka. It works great in my recipe. Here’s how it goes:

BTW, it’s easy to infuse vodka with most any flavor.  You could take your favorite unflavored vodka and put the portions for your Swamp Tea in a pitcher.  Add a half dozen tea bags and let it sit for a few hours.  There’ll be plenty of tea flavor!

If a big ole jelly jar filled with ice and what looks like lemonade is coming your way over at our place, don’t worry. It’s not moonshine, it’s just a little dose of Bob’s Swamp Tea. We’ll get back to work tomorrow. Meanwhile, kick your shoes off and sit a spell.